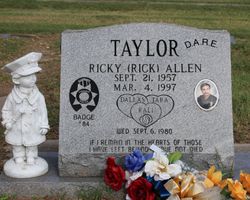 Rick was a founding member of the Alamo Area Crime Prevention Association.  Rick began his career with the Schertz Police Department in 1976 at the age of 19.  He was too young to purchase his own ammunition so other officers bought rounds for him.  He went to work at Hondo Police Department briefly, but returned to Schertz.  Soon after he returned to Hondo Police Department and settled in, rising to the rank of Sergeant.  Rick died on March 4, 1997 at the age of 39 while preparing to attend the FBI National Academy.  Rick was loved by the youth in Hondo and the city’s recreation center was named in his honor.  His survivors included his wife Oralia (Rali) and his children Dallas and Tara.